Vt. Philharmonic Plays Sunday: 'Clown of the Orchestra' Shows Off at Chandler 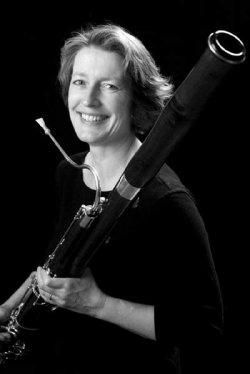 The quirky bassoon, sometimes called "the clown of the orchestra," will strut its stuff at Chandler Music Hall Sunday, when the Vermont Philharmonic, under the direction of Louis Kosma, brings an afternoon concert to town.

Gwyneth Walkerâs Concerto for Bassoon and Strings, featuring soloist Jonna Goulding of Randolph, is one of four pieces on the program. The concert, entitled "Old World, New World," also includes works by Borodin, Copland, and a concerto for double bass by a little known Czech composer.

Canât conjure up the sound of the bassoon? Think of the cranky grandfather in Tchaikovskyâs "Peter and the Wolf": His theme, lumbering grimly through the musical tale, was played by the bassoon.

The lowest of the double-reed wind instruments, the bassoon has one of the biggest ranges in the orchestra, covering, essentially, the bass and baritone ranges.

"It can pop around, high and lowâitâs got a lot of character âwith a reedy, woody sound to it," is how Jonna Goulding describes the sound of her favored instrument.

If thatâs not enough, the wooden bassoon with its curved silver tube, is decidedly good-looking, according to Goulding: "Itâs a gorgeous instrumentâeach one is made out of one single tree, an exotic tree that grows in the former Yugoslavia."

Goulding, who started playing the bassoon when she was 14, is a family physician at Gifford Medical Center, wife, and mother of three.

After about 20 bassoon-less years, she resumed playing eight or so years ago.

Goulding, evidently, is a high-energy type: She was in a midst of a medical residency in Thunder Bay, Canada, and on maternity leave, when she decided it was time to take up the bassoon again.

She joined the Vermont Philharmonic last year and currently studies with bassoonist Janet Polk of Nottingham, N.H., who premiered the Gwyneth Walker concerto in New Hampshire two years ago.

The first movement, "A Light Touch," opens with the bassoon "bouncing down the scale," according to program notes by the Braintree composer.

Goulding favors the second and third movements, "A Moment of Peace" and "In Motion," respectively.

"A Moment of Peace is a very meditative piece that shows off the sweetness of the bassoon," she said. "The last movement takes it though its range and ability; itâs fun to play, with a big cadenza full of spirit and energy. Itâs really a ripping, jazzy movement."

Walkerâs piece "really gets the character of the instrument quite well," Vermont Philharmonic conductor and musical director, Louis A. Kosma, said this week.

Kosma, commenting that Goulding had been "a great addition to the orchestra," added that he chose the concerto, in part, because of her.

The Walker concerto is one of two American compositions in Kosmaâs "Old World, New World" program. The other is Aaron Coplandâs "An Outdoor Adventure."

Kosma, himself a bassist with the Met, said Vanhalâs writing contained "beautiful, lyrical melodies" and "a nice use of harmonics."

Polovetsian Dances from "Prince Igor, by Russian Romantic composer Alexander Borodin, is the "show piece" of program. Played by the full orchestra and an impressive percussion section, the piece has dramatic dynamics from "very quiet to an extremely large sound," the conductor said.

The first melody in the Dances later became the popular song "Stranger in Paradise," from the musical "Kismet."

Kosma, who maintains a busy musical schedule, both as a performer and conductor, lives in New Jersey, and regularly commutes to Vermont for Philharmonic rehearsals and performances.

He has been credited with bringing the Philharmonic to new heights since his appointment as conductor in 1999.